At the age of 19, Christian was just looking for a job in his hometown. He may have found a career. Jobs are scarce on the Crow Reservation. Careers are even harder to come by.

Christian, who is part Crow and part Arapaho, grew up in Lodge Grass in a large foster family with “strong, loving parents.” He earned his GED in 2010, but last fall he needed to brush up on his math skills to pass the Test for Adult Basic Education (TABE). In December, he got a job working at the City Hall in Lodge Grass, picking up litter and maintaining the city park.

“It’s cool to know I’m improving my own community,” he said. He is an athletic-looking  teen who speaks carefully and expresses himself with a quiet humility.

After a month on the job, his boss encouraged him to look into getting the water operator’s license necessary to maintain public water systems. HRDC paid for a three-day course on the basics.

“I never knew there was so much to be learned about water,” Christian said. “It’s a lot to take on, but I guess there’s honor in that.”

After taking the course, Christian shadowed his boss during slack times.

“You’re pretty much almost like a chemist, knowing what chemicals to mix and not mix,” he said. The formulas tested his newly sharpened math skills.

For Christian, the next big hurdle is taking the exam for his water operator’s license, a marketable job skill on the Crow Reservation. “It’s more than just having a job at City Hall,” Christian said.

“It’s actually getting a legitimate license that would maybe be a career for the rest of my life, not just a job. It’s a huge goal that HRDC and I were pushing for.” 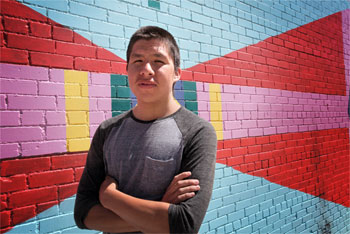